In India, we were told the mRNA C19Vs were the only ones to accumulate in organs and not viral-vector AZ. Is it true? 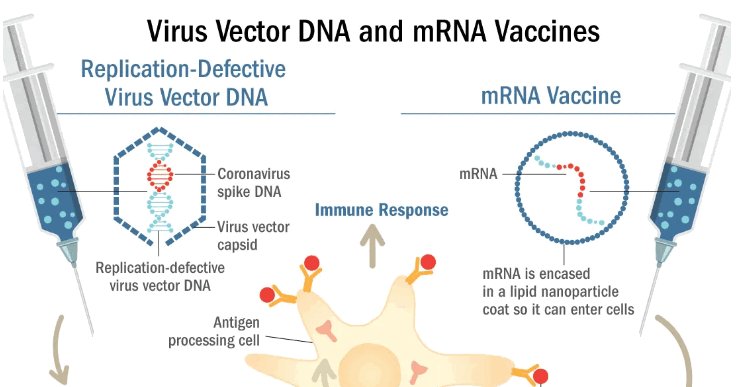 Part 2 of the CVD Series

The vaccine was different to the Pfizer or Moderna vaccines because it was a viral-vector vaccine (similar to Johnson & Johnson’s Janssen) instead of a mRNA one. Whilst the mRNA vaccines used RNA, protected in a lipid nanoparticle, the viral-vector vaccines encoded the genetic instructions to build the coronavirus’ spike protein in DNA. DNA is more stable as it is double-stranded whilst RNA is only single stranded.

So, AstraZeneca took these DNA genetic instructions and placed them inside another virus - a chimpanzee adenovirus. This adenovirus had been modified so that it could enter human cells but not replicate inside them or cause disease. However, once in a human cell, it could deliver its payload - the DNA instructions.

Now we are at a similar point to the Pfizer and Moderna vaccines, except there aren’t any potentially harmful lipid nanoparticles floating around, just an attenuated chimpanzee virus, that we probably don’t know the long term implication of either.

So, as with the Pfizer and Moderna vaccines, the AstraZeneca vaccine has now asked the human cell to begin translating the mRNA and build spike proteins. These coronavirus spike proteins are built and expressed on the outside of the human cells which then cause an immune response. Antibodies are trained to recognise the spikes and killer T cells try to destroy any cells containing these new instructions.

Remember these are human cells which the vaccine is training your body to attack and kill. We are constantly growing new cells to replace destroyed ones but some, for example cardiac cells, never regrow. So, ideally you don’t really want to be killing these off and training the body to attack them in the future.

Maybe, if the vaccine only stayed at the injection site and just transfected muscle cells in your arm that would be ok but as we have seen with the Pfizer documents (that they wanted hidden for 75 years) this didn’t happen.

But maybe the AstraZeneca vaccine did stay where it was meant to and didn’t travel all round the body?

Unfortunately, this is not the case. Similar to the FDA, the Medicines and Healthcare Products Registry Agency (MHRA) weren’t exactly transparent with the AstraZeneca documents. Fortunately, ICAN, who were instrumental in getting the Pfizer documents released, have been on the case, pressuring the MHRA with Freedom of Information requests.

After approximately eight months of the MHRA threatening to deny ICAN’s requests, they finally released 166 pages of records yesterday.

ICAN was forced to request the documents from the MHRA because the AstraZeneca vaccine was never licensed in the US and so all documents held by the FDA are exempt from disclosure.

After an initial review of the documents, ICAN discovered disturbing information concerning the biodistribution of the vaccine. The documents contained a study which was undertaken on mice and showed that, like the mRNA vaccines, the viral-vector DNA did not remain at the injection site. Instead it accumulated in organs all around the body, specifically the sciatic nerves, bone marrow, liver, lungs and the spleen.

Other revelations, discovered by ICAN, include documents showing that AstraZeneca was forced to amend its vaccine data sheet, in early 2021, due to conclusions that it was causing anaphylaxis shock in some people.

Another “shocking revelation” from the documents was a “heavily redacted discussion of two individuals who developed serious immune-mediated neurological demyelinating conditions following vaccination.” The documents say that there was no evidence of a causal relationship but the adverse event was then added as an important potential risk in the vaccine’s risk management plan.

Petition : Complaint against the highly divisive and highly polarizing...