A little more than a hundred years ago, on November 16, 1915, seven patriots were hanged to death after the culmination of what became popular as the first Lahore Conspiracy Case. These included Bakshish Singh, Jagat Singh, Vishnu Ganesh Pingle, Surain Singh s/o Boor Singh, Surain Singh s/o Ishar Singh, Harnam Singh and Kartar Singh Sarabha. These trials were to have an enduring impact on the psyche of Punjab and reverberations on India’s history. These hangings by the colonial government were one of the many in order to curb the war declared by the Ghadarites on the colonial government in India in February of 1915. 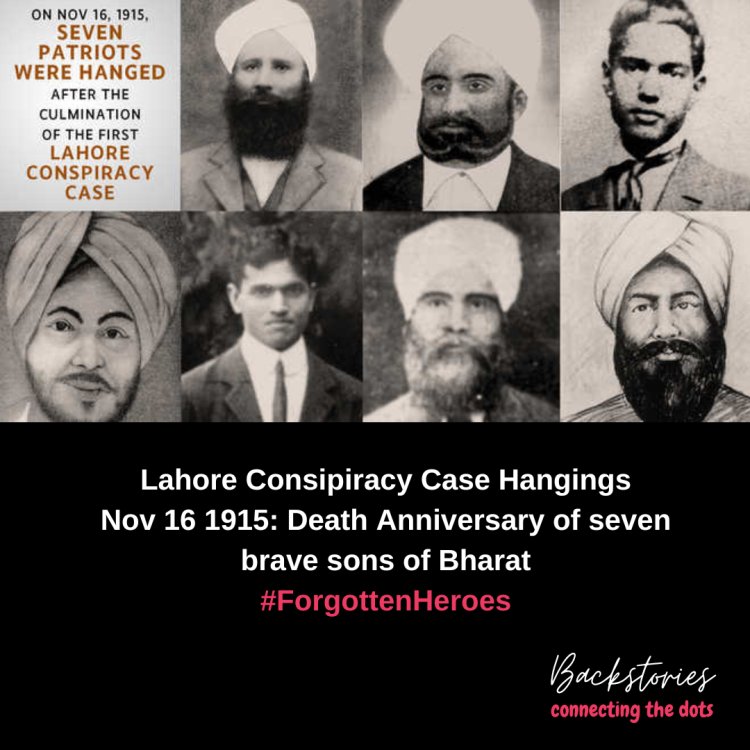 The Lahore Conspiracy Case trial, also known as the First Lahore Conspiracy Case, were the trials held in Lahore (then part of the undivided Punjab of British India) in the aftermath of the failed Ghadar conspiracy in 1915. The trial was held by a Special tribunal constituted under the Defence of India Act 1915. Out of a total of 291 convicted conspirators, 42 were executed, 114 got life sentences and 93 got varying terms of imprisonment. 42 defendants in the trial were acquitted. The uncovering of the conspiracy also saw the initiation of the Hindu German Conspiracy trial in the United States.

16 November is the death anniversary of seven freedom fighters who were hanged to death for their role in the 1915 Lahore conspiracy case.They were 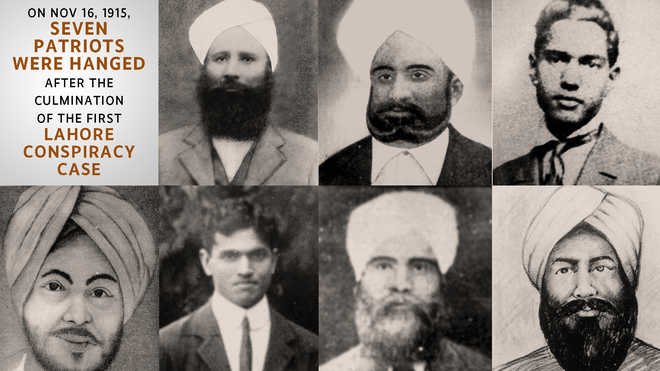 The revolutionary and patriot Kartar Singh Sarabha was merely 19 when he was executed by the British.Kartar Singh was born on 24 May1896 in Sarabha village near Ludhiana. He completed his basic education in Ludhiana.In 1912 he was sent to America for higher studies. Upon reaching San Francisco, an incident at the immigration office changed his life forever. He noticed that Indians were subjected to humiliating questioning while immigrants from other countries were allowed in after bare minimum formalities. This infuriated the young boy and he started questioning the existence of British rule in India.

The Ghadar Party was established by the Punjabi Sikhs of the USA and Canada in June 1913 also known as the Hindi Association of the Pacific Coast. The word ‘Ghadar’ means “mutiny” or “rebellion” or “revolt”. On November 1, 1913, the Ghadar Party issued their first newspaper from the University of California in Berkeley. This party was originally built around the weekly paper Ghadar. For the first time, a true picture of British rule was shown in the journal, simultaneously enunciating a vision for the future of India. In fact, the founders envisioned that the Ghadar would do the work of preparing the Indians for revolt until the actual war. The paper 1st came out in Urdu, then Gurmukhi. Later, the paper was sometimes also published in Gujrati, Hindi, Pashto, Bengali, English, German, French. 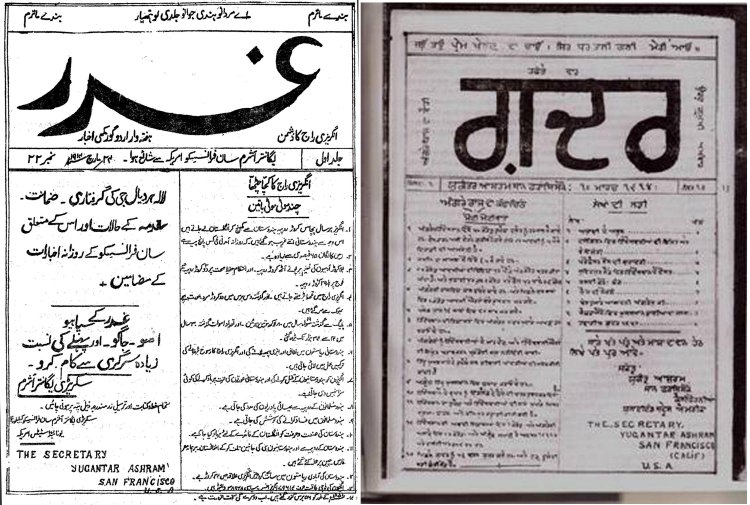 When the Ghadar movement was born in 1913, Kartar Singh became one of its key members.He was made in charge of the Punjabi edition of Ghadar, the party mouthpiece.The newspaper highlighted the atrocities of the British and fueled revolutionary ideas among overseas Indians.

Soon World War I broke out and members of the Ghadar Party decided that it was time to shift base to the homeland and mobilize the countrymen.On September 15, 1915, Karthar Singh left for India. He met well known revolutionary Rasbihari Bose in Banaras and informed him of the arrival of 2000 members and workers of the Ghadar Party and plans of the revolution.Unfortunately, the British got wind of these plans and launched a massive operation to apprehend them.Several members were arrested but this did not deter Kartar Singh from planning ahead. He went about preparing the base for the revolution in Punjab.

He focused on mobilizing Indian soldiers in the British army to join the movement. Especially cantonments of Meerut Agra, Banaras, Allahabad, Ambala,Lahore and Rawalpindi. And simultaneously set up a small scale arms manufacturing unit in Ludhiana.The date for revolt was set for February 21, 915.A plan was made to attack cantonments of Miyanmeer and Firozpur whereas Ambala was prepared for a mutiny.Meanwhile, the British reacted swiftly and arrested a number of revolutionaries.

Kartar Singh however, managed to evade arrest.The promised revolution did not come to fruition.Refusing to give up Kartar Singh made a last ditch desperate attempt on March 2, 1915 to rouse the Indian soldiers in San Godha and incite the soldiers to mutiny.This time a soldier got him arrested.He was sent to trial with the other members of the Ghadar Party at Lahore in what came to be called the Lahore Conspiracy case.Kartar Singh and many others were tried in the Lahore Conspiracy trial in April 1915 for their roles in the February plot.

When questioned about his role, Sarabha was defiant stating that it was his duty to get Indians to rebel against the British.Sarabha was executed at the Lahore Central Jail on 16 November 1915.Bhagat Singh always used to keep Sarabha's photo in his pocket. When Bhagat Singh was arrested a photograph of Sarabha was among the items officially listed in his belongings.

The freedom struggle hero Vishnu Ganesh Pingle who was executed along with Kartar Singh Sarabha and five other revolutionaries laid down his life for the motherland at the age of 26.He was born in Talegaon, Damderi village of Pune district on January 22 1889. In his school days he was influenced by the movement led by V D Savarkar. He went to Mumbai where he learned the ‘art’ of explosive making. The Swadeshi Movement had just started and he set up a Japanese style hand loom to be part of the symbolic struggle.After completing his schooling, Pingle went to Washington and got a degree in electronic engineering.

During his stay in the US, he came in contact with revolutionaries such as LalaHardhiyal, Kartar Singh Sarabha and Pandit Khan Shiram and became an active member of the Ghadar Party. Pingle used his engineering skills in making bombs for the party. After coming to India, he started revolutionary activities in Punjab and maintained secret contacts with revolutionaries including Rasbihari Bose and Sachindranath Sanyal.

During World War I, the Ghadar Party planned and armed uprising against the British.They arrested Pingle from Meerut cantonment on March 24, 1917 with 18 live bombs and other explosive material.He was hanged to death in the Lahore Central Jail on November 16, 1915.

India needs to cherish the memory of there forgotten heroes who fought and sacrificed their lives for our Independence.