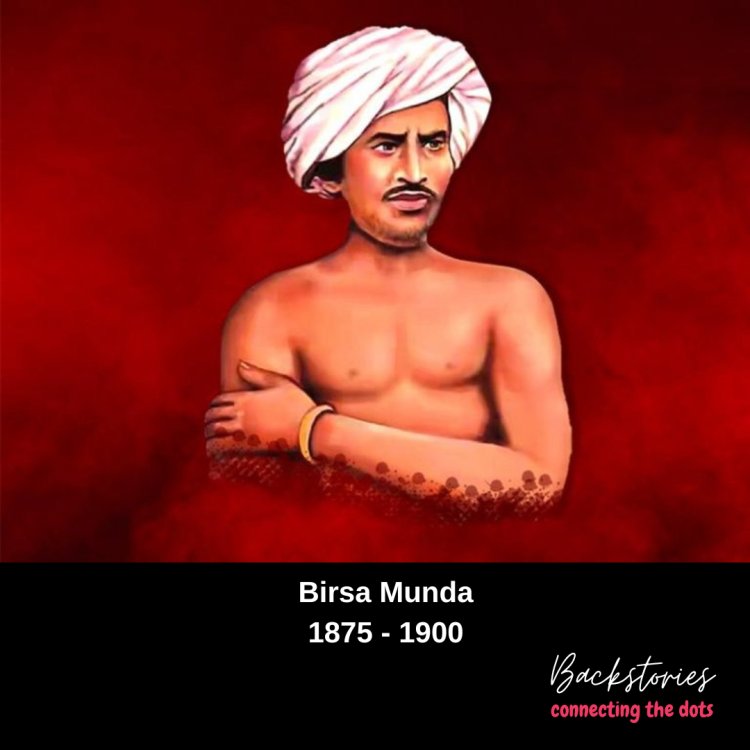 'Birsa Munda' was born on 15th November 1875 in Ulihatu near Ranchi in present day Jharkhand in the forest-dwelling tribal community called 'Munda'. Birsa Munda is the name of bravery that we do not know much about and do not try to recognize, he wrote and added to the pages of history the fighting spirit of the forest-dwelling people of India during his life which ended at the age of twenty-five.

During the late 1880s, Munda began to understand the nature of exploitation meted out by the British against the native tribals. The huge disruption caused by British agrarian policies made an impact on the livelihood of these tribal people, disrupting their usual way of life which was hitherto peaceful and in tune with nature. Not only British economic and political policies but also aggressive religious and cultural policies of the Christian missionaries which belittled the tribal people and their culture acted as fuel for their fight against the British.

During the period 1886 to 1890, Birsa Munda spent a long period of time in Chaibasa which was close to the centre of the Sardars agitation. By the time he left Chaibasa in 1890, Birsa was strongly entrenched in the movement against the British oppression of the tribal communities.

The British agrarian policies provided for the spark for the Mundas to revolt. The Mundas had followed the Khunkhatti system of joint landholding. The British replaced this with the Zamindari System, which allowed outsiders to enter these tribal areas. The entry of outsiders aided by the British lead to exploitation of the native tribals. Mundas, who were once the landowners were soon reduced to forced labourers resulting in further more impoverishment and deprivations.

As a reaction to the introduction of the Zamindari system or Permanent settlement in tribal areas, Birsa Munda in 1894 declared “Ulgulan” or revolt against the British and the Dikus – the outsiders. He was soon known as Birsa Bhagwan in these areas and a huge number of tribals began to follow Munda.

In 1894, Birsa Munda began to awake masses and also arose them against the British atrocities. Not only the tribals but also many other Hindus and Muslims also flocked to see the new leader of the masses.Birsa Munda travelled to every village to raise the consciousness of the people .He declared an end to Victorian rule and proclaimed the beginning of Munda rule.He organised an effective movement wherein people stopped paying taxes to the British.

The Christian missionaries were unnerved as Birsa was becoming the stumbling block in the path of conversion. Many within Christianity also began to join Mundas . He was arrested in 1895 and released after two years. After his release in 1897, Munda picked up the movement by re-organising the tribals. Munda
went underground and sowed the seeds of revolt against British. By 1899, he had built a strong army with proper training to tribal soldiers.

Bisra Munda stressed on the need of the tribals to study their own religion and not forget their cultural roots. His love for his land and people made him realise and see the atrocities against them. He couldn’t stand to see that and led a movement against the British. Birsa’s own experiences allowed him to understand how the people from his community were suffering. He did not only attempt to wage protests and lead anti-colonial movements but envisioned a radical rupture in the historical continuity of oppression, dominance, and exploitation.

Birsa, along with other tribal people had the capacity to protest against injustice and express their anger against colonial rule. The massacre at Dumbri Hill made it a “hill of the dead” when hundreds of tribals lost their lives for the cause of freedom against the modern ammunition of the British. The Great Tumult against Britishers sought to establish Munda Raj and independence. The slogan of the movement was “Abua Raj ete jana, Maharani Raj Tundu Jana” which means “Let the kingdom of queen be ended and our kingdom established”.

On December 24, 1899, Munda launched an attack on police stations and churches, killing few policemen. The energised tribal uprising had spread to almost entire Chotanagpur region. Birsa Munda called for a decisive war against the British and attacked the places loyal to the British for the next two years. The
British forces put all their might to suppress the revolt and attacked heavily on Munda guerrillas. The Britishers attacked the tribals and killed hundreds of people. Birsa made a tactical retreat to the hills of Singhbhum.

On March 1900, Munda was arrested in Chakradharapur Jamngopai forest. Munda died on June 9 in Ranchi Jail. Although the British government told the outside world that the death was due to cholera, Munda was actually executed. A million salutes to that brave patriot

History has always been created within the walls of power and wealth. But there was a forest dweller leader in India who made a place in history with his life. A patriot who sacrificed his life to fight against British rules. Birsa Munda is the name of the young man who fought for his community and country in the jungles of Jharkhand. It is of Birsa Munda, the mighty guerrilla fighter who led the struggle against imperialism and gentrification, with the only portrait of a tribal leader in the central hall of the Indian Parliament.