Petition : Complaint against the highly divisive and highly polarizing statements made by Mr.John Brittas at the State Conference of Kerala Nadvathul Mujahideen on 30.12.2022 at Kozhikode 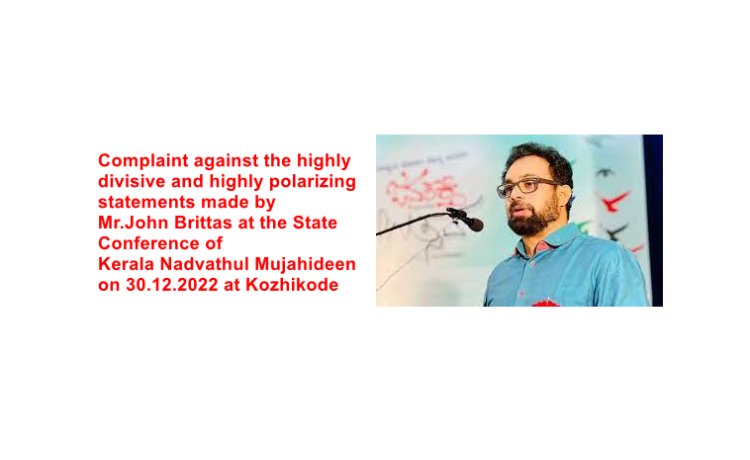 Subject: Complaint against the highly divisive and highly polarizing statements made by Mr.John Brittas at the State Conference of Kerala Nadvathul Mujahideen on 30.12.2022 at Kozhikode

1. The complainant brings to notice of the Station House Officer, the highly provocative, divisive and communally polarizing speech made by Mr.John Brittas at the State Conference of Kerala Nadvathul Mujahideen on 30.12.2022 at Kozhikode. The said speech of Mr.John Brittas was widely circulated through social media and main stream news channels. It is highly shocking that a member of Parliament who had been a journalist for many years was openly exhorting division in the country on grounds of religion and was actively stoking hatred against the Central Government and the Judiciary by making highly polarizing and provocative statements.

2. A perusal of the contents of the speech would show that the said statements were made with the specific intention to promote enmity between the Muslim minority and Hindu majority in the country. Mr.John Brittas’s attempt was to disturb communal harmony and breach public tranquility on religious and sectarian lines. The statements made during the speech were a deliberate and malicious act intended to incite religious hatred, stoke hatred and distrust against the Central Government, the Judiciary, and the majority community. The video of the speech is available at https://www.youtube.com/watch?v=1QYKKX8ihic (6.58 mins to the end) along with several news websites. The English transcript of relevant portion of the hate speech made by Mr.John Brittas on 30.12.2022 in Kozhikode at the venue of the State Conference of Kerala Nadvathul Mujahideen is extracted below for your perusal:

“Does Mujahid leadership think that the ideology of RSS can be changed after having a conversation with them? No! Why is there a hesitation to say that aloud? You should.

In India the Muslim population is in 20 crores. The following questions hurts me as a parliamentarian: Is there any representation of minorities in the power hierarchies of the ‘Indian empire’? Do we even have a Muslim minister for namesake in India? In Gujarat, by the end of 1980s, even the major opposition run by Congress stopped nominating a Muslim candidate for Lok Sabha. Finished it. That is the sad predicament. Now, we should realize what is the volume of representation in law enforcement scenario, the parliament, legislative assemblies, the government, and constitutional bodies. Does anywhere else in the world whether a population of 20 crores face such a triviality or vacuum in the levels of authority? In reality, such a vacuum is not felt even in countries which are facing war or at war.

Babri Masjid incident was mentioned in a conversation here yesterday. When Babri Masjid, which was a synonym, symbol, section of Indian secularism, fell and disintegrated on 06.12.1992, I witnessed it as an unfortunate media person. Those moments are still vivid inside me. When our car was separating the fog and moving from Faizabad to Ayodhya we never thought Babri Masjid, which was a 500-year-old pillar of Indian secularism, would be reduced down to dust. Even when media persons like us were settled at Manas Bhavan opposite to Babri Masjid and were killing time chatting, we never expected or thought that a country like India was moving towards such a danger. Back then, on 1992, even being a simple media person, I wrote Babri Masjid was destroyed. But do you know what were the headlines of the major newspapers in Malayalam? The building of dispute was demolished. Whose dispute? A dispute with whom? All major English newspapers got concerned back then and wrote editorials about the following thoughts; how would India evolve if things go like this? Can a modern country like India be able to thrive now? However, decades later, these abovementioned newspapers wrote eulogies supporting the decision when the Supreme Court handed over the land upon which Babri Masjid stood to its own demolishers. Upon releasing this eulogy some said that at least this issue is over by now. There are people who were relieved that the surface of mistrust between Hindus and Muslims were over. But we said then and there itself that it will not be over, ever. You should observe the news incidents coming from North India. It highlights what we said earlier.

I tell my media friends that you should not forget to see the entirety of India by just staying in Kerala. Kerala’s media persons are blinded in a similar way as to the adage about one forgetting to observe the forest by being fooled by the foliage of a tree line. That is because in Kerala, the media persons have the freedom and liberty to write anything about anybody anytime. Isn’t that true? Just observe whether you have the same freedom once you cross the borders of Kerala. Today in none of the leading national dailies any news will come against the central ruing party BJP. Maybe due of this exasperation the former Chief Justice of India might have commented that the investigative journalism in India has ended. Prannoy Roy’s NDTV was functioning as an island.

Last week, the same NDTV was surrendered to the Adani Group who are the flagbearers of BJP. By measuring the journalistic culture of a nation, we can understand whether it is a meaningful democracy. Democracy will weaken in a country when its freedom of press is affected. When the first and second pillars of Indian democracy surrendered to fascism, we were relieved that the remaining two pillars, judiciary and press, would hold India together. But while observing the incidents that have been happening for the past couple of years these remaining two pillars are also disintegrating and coming down.  The pillar of press and journalism has completely surrendered to the Centre ruling BJP.

Supreme Court is now listening to cases which were kept in cold storages for the past 6 years. A case on demonetization was filed 6 years ago. Judges who had been coming and going for the past few years have kept cases like this in freezer. It is not about the case on demonetization alone. In one fine morning the Centre can change the status of a state into a Union Territory; regarding the decision on Kashmir. Similarly, cash to be handled as gifts during election time in the form of Electoral Bonds. What is Electoral Bond? 99% of the electoral bonds belong to BJP. Whose money? That’s why people in Delhi say that the country is ruled by 4 Gujaratis. In Hindi it says that desh chalathe hai chaar Gujati log. Two sell and two buy. I don’t need to say who are selling, but the ones who are buying are Ambani and Adani. Like this, 4 people are ruling this country.”

3. In his speech, Mr.John Brittas makes it very clear that there is no point in any discussion with the RSS and demands that the delegates of the Kerala Nadvathul Mujahideen concur with him. Mr.John Brittas then states that there is no representation of Muslims at any sector in the country including Central Government, Executive and the Judiciary and that even the Congress party has not been giving Lok Sabha seats to Muslims in Gujarat from the 1980s. Mr.John Brittas stated that nowhere in the world, 20 crore Muslims are completely neglected and ignored other than in India. Accusing the Judiciary also to be party to the discrimination against Muslims, Mr.John Brittas pointed to the judgment of the Hon’ble Supreme Court in the Babri Masjid case and proclaimed that the issue will never be settled regardless of the decision of the Apex Court. It was stated that the Judiciary was putting cases in cold storage at the behest of the Government. Mr.John Brittas’s brazen attack against the Judiciary accusing it to be partisan and exhorting mistrust and imputing mala-fides against the top most Court in the Nation is nothing but an all-out declaration of war against the Nation and its basic structures. The independence of the Judiciary was called into question by Mr.John Brittas who methodically scandalized and lowered its reputation among the general public. The above statements in the speech fall within the ambit of Sections 121, 153A and 295A of the Indian Penal Code and is also liable for criminal contempt under the Contempt of Courts Act, 1971.

4. It is submitted that the accused has cleverly played on the religious feelings of the Muslim community by exhorting them to disbelieve all the structures of the Nation including Government, Press and the Judiciary. Disregarding the basic tenets of democracy, Mr.John Brittas proclaimed that there is no purpose in conducting debates or discussions with the RSS. Thereafter, Mr.John Brittas proceeded to state that there is no hope in the Judiciary, Press and the Government as well. Knowing fully well that the Babri Masjid dispute is an extremely sensitive religious issue, Mr.John Brittas used the said issue to polarize the Muslim community at the venue of the State Conference of one of the most popular and powerful Muslim organization in the State. By spreading despair and mistrust in the Muslim community, Mr.John Brittas has made an attempt to turn them against the Government, Judiciary and the majority community.

5. In the light of the above, it humbly submitted that the respected Police authorities may kindly register a criminal case against Mr.John Brittas for the hate speech made by him on 30.12.2022 at Kozhikode and justice be rendered.