It happened on this day in 1966, under the watchful eyes of Indira. On November 7, 1966, a large group of people approximately numbered at 100,000 assembled at an open space near the Parliamentary complex. Led by a group of ash-smeared, trishul-brandishing Naga Sadhus, the group had a single demand — a countrywide ban on cow slaughter. The gathering was anything but a surprise. Hindu organisations had been planning this moment for the last two years. But the magnitude of it caught most, especially the government, off guard. By noon the leaders were extolling the virtues of the ‘mother cow’, and soon moved towards the main gates of Parliament and at that moment, Indira Gandhi ordered her forces to start killing the Sadhus.

The demand for a ban on cow slaughter had come up in the Parliament, in the Constituent Assembly & even during the nationalist movement in the past.The religious and economic importance attached to the cow went back even further. Perhaps the oldest proponent of the cow symbolism within the Congress was Bal Gangadhar Tilak. He made the cow symbol an integral part of the Shivaji festival, which he had instituted and popularised, apart from the Shivaji festivals, Tilak used the cow symbol in other contexts as well, particularly in his political campaigns.
The Home Rule campaign was compared to the cow protection movement: ‘India is a great cow’, he frequently told his audiences, ‘that cow has given you birth. You are maintaining yourself on that cow’s industry, on her fruitfulness’.

Gandhi too in 1924, inaugurated the Go Seva Sangh, asserting that cow protection was of ‘greater moment’ than Swaraj itself. As late as 1942, while giving a speech, Gandhi is believed to have noted that “If she (the cow) dies, we also die along with her — we, that is our civilisation.”
When an independent India was taking birth, the question of the cow came up yet again among Congress politicians who were part of the Constituent Assembly. Several leaders from the Hindu-conservative wing of the Congress asked for a ban on cow slaughter to be part of the constitutional framework. Particularly vociferous in this regard were Pandit Thakur Dass Bhargava, Seth Govind Das, Shibban Lal Saxena, Ram Sahai, and Raghu Vira.

However, Nehru remained firm that legislation against cow slaughter be left to the states. Even in 1955, when a private member’s bill was introduced in the Lok Sabha demanding a centralised ban on cow slaughter, Nehru promised to step down if it was carried. The House rejected the bill by 96 to 12 votes. However, the gathering of November 7, 1966 was in many ways a watershed moment in Indian politics. “A good case for the 1960s as a turning point can be made on the basis that it was the decade when the Hindu Right first made its mark in India as a political force,” writes historian Ian Copland in his article ‘History in Flux: Indira Gandhi and the ‘Great All-Party Campaign’ for the Protection of the Cow, 1966–8’. However, as Copland goes on to explain, the cow protection movement of November 7 by the Hindu Right, also in many ways was a turning point in the political career of the Congress party and particularly in that of its leader and then PM Indira Gandhi.

Gandhi, Copland explains, addressed the issue at two fronts. First, in an address in the Lok Sabha on January 5, 1967 she explained that she was deeply concerned about the problem of cow-killing and was setting up a high-level committee of animal husbandry experts and politicians to check on the feasibility of a total ban on cow-slaughter. Further, she called on the states that had not enacted anti-cow-killing laws to bear in mind their obligations in that respect under the Constitution.

Secondly, she promised a high-level committee of inquiry that would consider the scope of the existing constitutional provisions for cow slaughter and look at their possible amendment. However, Gandhi was careful to ensure that majority of the members of the committee consisted of trustworthy Congress politicians, secularists, as well as federal and state bureaucrats. The measure came as a disappointment to most Hindu right-wing party members, some of whom were part of the committee as well. The two groups were often at odds over the issue with the cow sympathisers seeking a total ban and those from the Congress insisting that there were other ways of protecting cows rather than prohibiting slaughter. Finally, the committee came out with its report in 1973 stating that a total ban on slaughter was unnecessary.
The Cold Blood Genocide of Sadhus & subsequent break within Congress jolted Indira, but she already had managed to place Yes Men at all important institutions including Press and Universities.

They were instrumental in shaping her career and giving her the image of a steely, resolute leader who could take care of majoritarian interests just as well as those of the minorities. And then in 1969 elections, Indira formed INCIndia and the symbol was Cow & a Calf. 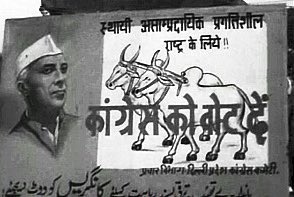 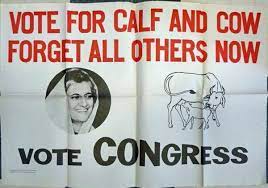 Copyright & Disclaimer : This article is a reproduction of the tweet thread https://twitter.com/sheshapatangi1/status/1589595451598471168 . We do not intend any infringment of copyrights.

Another espionage case from Kerala?